There I was, looking down the tiger that is a low blood sugar. No meter, no CGM, no glucagon, no low snacks, nothing, nota, zilch, jack squat. Not good at all. What lead to this d-dad fail? Assumptions! Is that not the path to most failure? And that leads to the lack of planning, or in my case, I did not ask a simple question.

It was Friday afternoon and I was hauling some yard waste with my brother. It was a whole truckload, and he volunteered to drive to my house and load up his truck with my crap from spring cleanup. I ask my girls if they wanted to come with me and their uncle. Only Rissa wanted to go. That’s where the problem started. I did not step up and make sure she had her CGM, meter and a small supply of low snacks.

Before I go any farther, I want to tell you of the shift my wife and I had in d-parenting. We had been trying to hand off some of the d-duties to the girls: check, bolus (even if you sneak food), calibrate CGM’s and let us know if any alarms go off when we are not in the room. After speaking with a psychologist, that happens to have type 1 diabetes, he said I might be asking a lot out of a 10 and 12-year-old. The girls still check, bolus and calibrate, but under out guidance and reminder.

So that is where the problem with the trip to the yard waste dump site started. I did not check with Rissa and see if she had any of her supplies. She did not, and once we got to the yard waste dumpsite, she complained of the heat. I ask what her dexie said, and she informed me she did not have it, or any supplies. I told her it was okay, and dad should’ve reminded her to bring it. After asking how she felt and determined she was not low, we continued to shovel all the dirt and rocks out of the truck.

I ask her again when we were leaving, and she looked and responded she was fine. The house is maybe five or six miles from home, but it is several side streets, a lot of construction, and many stop lights. Nothing quick about the trip. I keep looking at her in the rearview mirror. She started to get “that look”.

Remembering a trip with the whole family after Audi was diagnosed, I did not want a repeat. Nine years ago, a new d-mom and d-dad were trying to console a screaming three-year-old. We were only a mile from home. What we needed to do was pull over and check, but we drove home; we checked her at home and she was in the 20’s. Nine years later, I would not repeat that mistake.

I was driving my brothers truck and I think he was starting to sweat a bit at my increase in offensive driving and rate of speed. Not wanted to drive that last two miles, I pulled into one of my favorite liquor stores. Not having cash (another mistake) I grabbed two bottles of waters and a pop. I cut in front of two very indecisive shoppers and threw my drinks on the counter. I was out in a flash and tossed the pop to Rissa.

Two miles and a few minutes later we were home. I had her check and she was 78, and that was after she drank half a pop. Disaster avoided. I won’t remember that nasty look of the younger, tight polo shirt wearing twenty-something in the liquor store, apparently was uber offended I cut in line. Too bad sucker. I had a medical emergency.

A few days later I was back in that liquor store (no surprise there) and I thanked the owner and told him of the emergency. He smiled big and was happy everything turned out alright. Nice store and I will happily spend my hard-earned money in his store. D-dad fail, but not a d-dad disaster. Plan ahead and take the leadership role is the moral of the story. And if you piss off and too tight polo wearing twenty-something, call it a bonus, because I sure will!! 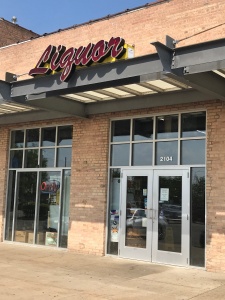 I am a diabetes dad too

I'm a blogger that writes about Type 1 Diabetes. I do this because I have 2 daughters with Type 1. I also have a another daughter and a baby boy that do not, I would prefer they don't get diagnosed either.
View all posts by Tim →
This entry was posted in D-dad Corner, Uncategorized and tagged #ddadfail, #type1diabetes, bleedingfinger blog. jdrf, d-dads, dad blogger, diabetes, Newly diagnosed child with Juvenile Diabetes Type 1 Diabetes, raising 2 kids with type 1, raising 2 kids with type 1 diabetes, Type 1 Diabetes. Bookmark the permalink.