Looking back at 2014, and looking ahead:

So we made it, we survived 2014; it was a year of the highest of highs for me, and the lowest of lows. Through it all, friends, family and the Lord were there to celebrate and cry alongside me. How fitting would it be to look at 2014 in a stream of consciences; what is a stream of consciences you ask, you can google the definition. So here are my thoughts, in a stream about 2014. Disclaimer: no animals were injured during the writing of this post, however, a few glasses of beer were drunk, chips ate and none were gluten free.

Thee Artificial Pancreas, rebranded (no pun intended) to the Bionic Pancreas, made the national newspapers and social media news feeds. It was shared in everyone’s news feeds, shared in everyone else’s news feed, shared in groups, shared in pages and shared on blogs. Also it was shared by non-d friends on my wall because “we didn’t know if you heard about this yet” and “we wouldn’t want you to miss this story”. Oh, thanks, there’s no way I’d ever see it if you didn’t let me know non-d-person on my friends list (sarcasm intended). I read Diabetes Mine, Insulin Nation, Diabetes Daily, DiaTribe, well you don’t get the point, I don’t miss anything (most of the time), wink, wink.

Hey, let me tell everyone the story again; Dr. Ed (not a medical doctor) made a Bionic Pancreas, didn’t really make anything, just an amazing algorithm that works slick. He took a couple of Tslim pumps, a G4 Dexcom and an iPhone 4, loopy’d them all together and bam, Autobot Pancreas. Bill Woods, formerly of MyGlu, got to do a clinical trial, follow video link here and listen his gluttonous journey around Boston trying to break the damn thing (he didn’t). My blood sugar spiked (I don’t have diabetes) watching the whole thing unfold on social media.

I met Dr. Ed at Friends for Life conference (aka FFL). FFL is a really large meeting that goes on for few days where a bunch of people with kids with Type 1 Diabetes flock to Orlando Florida in July, it’s hot that time of year, but it’s inside and air-conditioned. Also, a bunch of people who come to the conference are adults with Type 1. I had a few people comment on my Facebook post that they couldn’t hardly wait to see me, when I saw them, all I got was an “oh, hi”, I was so confused. I did meet a twitter follower, she tweeted me that she just met my wife; it was cool to meet in person. I did see a lot of my buddies and got to meet some new people and make new friends, a bunch of them were from Chicago, awesome bunch of people; we’ll meet again.

Here are a few more stories that made the headlines:

Inhalable Insulin was approved by the FDA, its insulin you inhale. Disclaimer: Bill Clinton can’t use it!

Breaking news, this just in, people do not change their lancets on a regular basis; this has caused a huge back supply of lancets. The meme is free of charge. 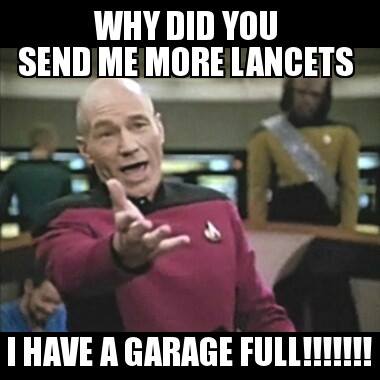 More breaking news, researchers at Harvard did something with stems cells that they say it will cure Type 1 Diabetes. Once again, the ever so famous phrase was used; the cure is, quote “5-10 years away”.  A friend of my neighbors told us this same thing nearly 6 years ago when Audrey was diagnosed; she’s an eye surgeon, I’m sure she’s in the “know” on stuff like that, sarcasm intended. I really don’t want to see or hear from that individual again! 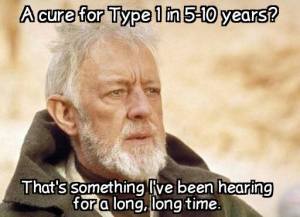 The American Diabetes Association held its 74 Scientific Sessions in San Francisco this past June; they talked a lot about diabetus.

The JDRF announced the “go ahead” on it encapsulation program, it’s not a cure, but they, in a colloquial explanation, saran wrap beta cells to keep the killer t-cells from eating them. They do this in part because Type 1 is an Autoimmune Disease.

CGM in the cloud is a dominate discussion in many Facebook groups. I ask my friends who’s a meteorologist, if he knew anything about it; he didn’t. I did find out that it takes a smart phone, Dexcom receiver; I’m so confused I’ll quit talking about it now.

My friend Melissa of Sweetly Voiced, apparently likes the Asante Snap pump, and wrote a review. Also, she did some d-parodies which she posted on her blog; check them out, there funny. I saw her at FFL, she thought my son was awesome, I agreed with her on that. Lastly, Amy of mom of an extra sweet inulin challenged girl talks about her daughters 6th d-versary; once again, she portrays the emotions of raising a child with Type 1 like no one else. I don’t want forget Tom of Diabetes Dad blogs every day, and wrote about everything, I can’t condense to one sentence, so check out his blog.

Maybe the biggest thing of this year for me was having a new born baby; he was born a couple of days after Christmas 2013. So much of 2014 was dominated by adjusting our lives to him and raising 2 little girls with Type 1. Having 3 girls, it was a great relief to finally have a boy; it was emotionally the best feeling because we had decided not to have any more kids after our 2nd daughter was diagnosed with Type 1. The guy has become a rock star on social media; his pictures get a gazillion likes. I nick-named him Scrunch, because he takes my JDRF hat off, scrunches it up and chews on it. I sure hope the cotton is GMO free.

My daughters both switched to the Tslim pump, I wrote a blog post about the story. That will be an ongoing story into 2015. Speaking of next year, things I’m looking forward to in 2015, one is my children’s book being done; the illustrator has had it for a while. I told her I wouldn’t rush her. I can hardly wait to see the finished product. I hope that it helps little kids with Type 1, that’s the goal! Another is getting back on the horse blogging wise; see previous thoughts about having a new baby and 2 girls with Type 1.

There are big rumblings about the G5 Dexcom getting submitted to the FDA early 2015. This excites me because having 2 girls with Type 1; I’ll take every advantage I can get. Hey, did I mention the Bionic Pancreas?  It will help having the G5 looped in with that, G4 is pretty awesome; G5 is going to be better. I’d say it helps pave the way for it for the Autobot Pancreas.

I almost forgot the ADA 75th Scientific Sessions will be in Boston this June. I really hope I can go. I’ll be excited to hear all those research updates. I went to the 73rd in Chicago 2 years ago. I really enjoyed the free food. I hope to run into the guys from Pancreum again, sounds like they’re moving forward with their Autobot Pancreas too.

I’d really like to hear more on immunology in the New Year! My girls do have an autoimmune disease. I’ve been reading about this researcher from Israel, there are some exciting things going on. Dr. Eli Lewis discovered some interesting things, he’s an immunologist. I’m a fan of immunology, big fan! I sure hope Dr. Faustman gets the funding for phase 2 of her trial. I think these 2 might hold important keys for the cure of Type 1 Diabetes. Key word is might, try to understand that.

It won’t take long and summer will be here, maybe I’ll write about Father’s Day like I did last year.  This time, it will be posted here, on my blog. Summer time will be fun, as long as I get the addition on my house. I have a need for more space; see previous paragraphs on having 4 kids. But summer time once again will be marked by our yearly adventure to Friends for Life. I hope we can make it. I want to see my buddies from Chicago again. That’s a cool crew.

It looks like 2015 will be full of things, hopefully fun things, not loaded with stress like 2014. Maybe I’ll be able to load up the family for a camping trip to the Two Hearted River. Get away from the business of life and spend time watching the kids play on the shore of Lake Superior. Fish the Two Hearted River with my dad and hear all his stories again. Let’s see how much time I have left over for that; maybe I should throw some other stuff in the crapper and do that instead.

That is all the thoughts I have left for you my friends. If this post doesn’t make sense, just imaging not getting any sleep for the last year, CGM’s going off, crying baby at night, piles of stress and all the other d-parent duties added in. I do hold down a full time job and work a lot.  What sums up 2014 the best for me, the song How Bizarre does; its driving me crazy every time I look around. That’s the year I remember, in a stream of consciences. What will 2015 bring? You want to know the rest, hey, buy the rights.

2 Responses to Looking back at 2014, and looking ahead: